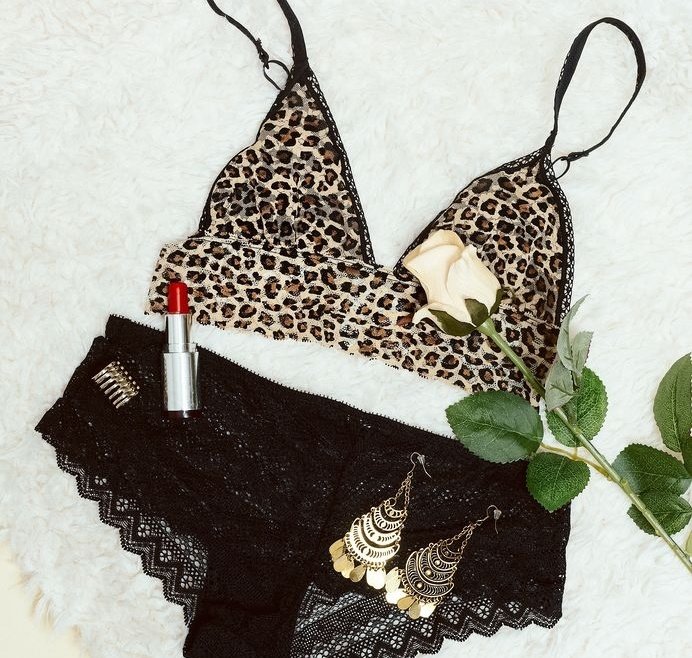 Before the mid-nineteenth century, women’s underlinen and underwear were called “underclothes” or”undergarments.” Afterwords, these garments became known as “lingerie,” a word derived from LIN, the French word for linen, linen draper, or “loosely hanging clothes.”

Genesis 3:7 alludes to Adam and Eve’s strategically placed fig leaves as the very first caches-sexe, or cover-ups, born of modesty.

“And the eyes of them both were opened,

And they Knew that they were Naked;

And they sewed fig leaves together,

And made themselves aprons.”

Some underwear aficionados have proposed the fig leaves were held in place by long stems of grass picked from the Garden of Eden and woven into the leaves, making the G-string the great-great-great-grandmother of all underwear.

The first example of a close-fitting garment is found on a small Greek sculpture dating from 3000 B.C. The figurine is that of a female athlete, or perhaps a slave, wearing what looks like a pair of briefs and a necklace.The next example, dating from around 2000 B.C., adorns a Cretan statuette of the Snake Goddess from the Palace of Knossos. The statuette is wearng a tight-fitting garment that resembles a bolero jacket, which hangs from the shoulders and upper torso down to the waist. The garment is laced up to the area just below the statuette’s breasts and is bare in front, revealing her breasts.

As early as the 16th century, women wore scented pomander between their breasts (a reminder of which can be found today in an embroidered rosette at the center of some bras) to repel body odor.

FIG LEAF (first lingerie company was in the Bible )

The key word here is memorable. Look for opportunities to get out of the rut and routine for a couple of hours or a couple of days. A fresh setting and uncustomary activities can lift your time together out of the mundane and weave it into the stuff of memory.

LOVE for a LIFETIME

“You can build a stable relationship that will withstand the storms of life.”

The Romance of a Lifetime

As time goes by, treasure the memories you share and cherish the moments you have together.  Those memories and moments interlock to forge a bond that builds and inspires a deeper, more enduring love between you and your partner.